To the Kingdom of Walrus and Polar Bear. Ecotour to the Chukchi Peninsula (Chukotka). Birdwatching 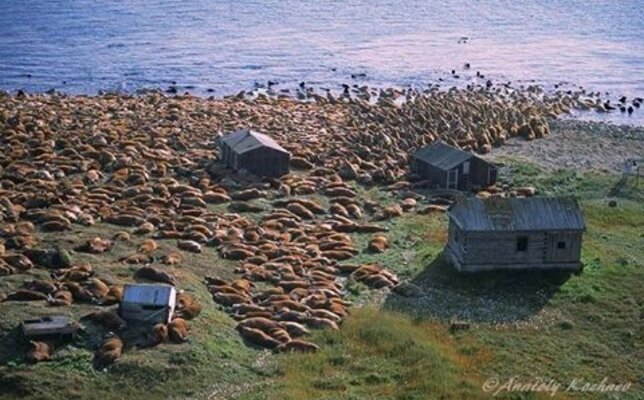 Day 1: Arrive in Anadyr at 12.25 local time. Rest for some time at the hotel in the airport.

Day 2: Breakfast in the hotel. Flight (scheduled Antonov-24 airplane) to Egvenkinot, the administrative center of Iultin District (about 90 minutes). Flying small planes or helicopters over Chukotka is always an unforgettable experience, especially in the eastern area with its fjords and mountains.

Short excursions in the settlement vicinity for birdwatching on the coastal spits and small rivers deltas (chances for Mongolian Plover, Red Knot, gulls and seabirds) as well as on the mountains slopes.

Transfer by 6WD bus (“vakhtovka” - a truck converted into a bus, somewhat like tundra buggies used in Churchill) to Amguema Village. Amguema is a village of Inland Chukchi, located in a broad river valley. It is one of the most traditional village of reindeer herders in Chukotka, known for dances and songs that we’ll have a chance to see during our stay.

Inland Chukchi are mostly nomadic, and use their villages only as bases for year-round travel across the tundra. If we are lucky enough, during our stay in Chukotka we might have a chance to see the local carnival called Vylgynkoranymat (the Day of a Young Deer), accompanied with a sacrifice to the spirits of the tundra and ancestors, sports competitions, music and dances. The nomads live in yarangas - tipi-like deerskin tents with light wooden frames. Their camps are usually moved at least 3-4 times every winter. The Chukchi have a special breed of domestic reindeer called hargin, which is used for individual riding as well as for pulling selds.

Overnight on the way in tents. In the afternoon of Day 6, we arrive in the small village of Vankarem. Overnight accommodation: homestays with local families in recently built Canadian houses and/or in local school (with sleeping bags and maths).

While on a boat trip at Chukchi Sea, different species of seals (Bearded seal, Spotted Seal, Ringed Seal and possibly Ribbon Seal) are expected and Walruses, Grey Whale and even Bowhead Whale and Orcas might be seen.

Listed below is a draft itinerary for these days, but real program can differ from this and be very variable because a possibility to reach Kolyuchin island and Beliaka Spit will depend to a great extent on current weather and ice situation.

In the afternoon of the Day 8, we return by motor boats to Vankarem.

Days 9-10: Excursion to coastal tundras and spits in the area of Vankarem or Nutepelmen lagoons. Overnight in Vankarem (homestays and/or in school building).

Day 11: Transfer back from Vankarem to Egvekinot by scheduled helicopter (or by caterpillars to Amguema). Overnight there in private houses with host families.

Day 12: Transfer by 6WD bus to Egvekinot. On the way, make a loupe route to the

Arctic Circle which is located just 24 km to the north along Iultin Road. There are some abandoned GULAG-era prison camps along the way. The road almost precisely follows the 180th meridian – the dividing line between the Eastern and Western Hemispheres. In the evening, arrive in Egvekinot.

In Egvenkinot, we’ll stay in Canadian-made guesthouses, and dine in a local café-restaurant.

After dinner, we’ll spend some time in a sauna.

Day 13: Excursion in Egvekinot area. Depending on weather situation and your wish, possible options are:

Dinner and overnight in Egvekinot.

Day 14: Departure from Egvekinot to Anadyr. If there will be a scheduled passenger boat trip, we will take it. If scheduled boat trip will not take place these dated because of ice situation, we will have to take a scheduled flight if possible, or rent an all-terrain vehicle. So, the date and way of our trip back to Anadyr can vary a little bit.

Travel by 2 caterpillars (or motor boats) to the Russkaya Koshka Spit (one of key monitoring sites for breeding Spoon-billed Sandpipers). At coastal mudflats, observe a stopover of up to 10 000 migratory waders (in July, 33 species of waders recorded). Mountain birds of Golden Chain (Great Knot, Snowy Owl and others). If motor boats will be used, a visit to Aliumka island for seabirds and Gulls is possible.

Overnight accommodation in the field will be in tents, upon return – at the hotel of Anadyr airport.

Days 11-12: Reserve days for the case of bad weather (in Chukotka conditions, it is absolutely necessary to have enough reserve days in the program, as in case of bad or stormy weather in previous days key destinations cannot be visited by motor boats).